Fortunately, Ghostpops is a really talented composer, so a dozen listens of the aforementioned track was a very pleasant experience. However, since the EP has yet to be fully edited and mastered(it has not been released to the public as of this posting), I will describe the auditory experience in a way that guided my thought process. Working with what was essentially a "demo", proved to be an interesting challenge to overcome as I drafted my designs to match and encompass the nuanced nature of the nearly 30 minute long EP. So, to simplify that process I turned to Pinterest for reference. 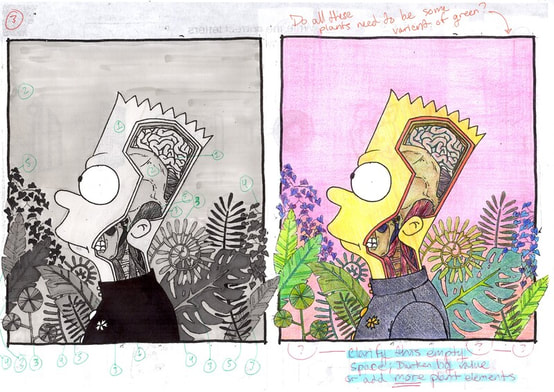 After deciding the best value combination, I review a variation of color palettes; some of those ideas can be seen written in the bottom margins of the original line draft above. Although, for the sake of expediency, I chose to explore the 3 options that had the most unique visual promise in terms of proportion, contrast, and balance.

To Ghostpops credit, there were a lot of sonic textures and tonality shifts throughout the nearly 30 minute EP, but the overall mood felt something akin to the fall season. I chose 3 different times of day and a combination of hues among the foliage to reinforce this messaging. Since, a new listener may not be aware of the contents of the track, I felt it was best to telegraph that idea as much as possible in the presentation. Though we concluded to proceed with the pink option above, I've included the other two images below since I ended up incorporating some of those individual ideas in the final product. 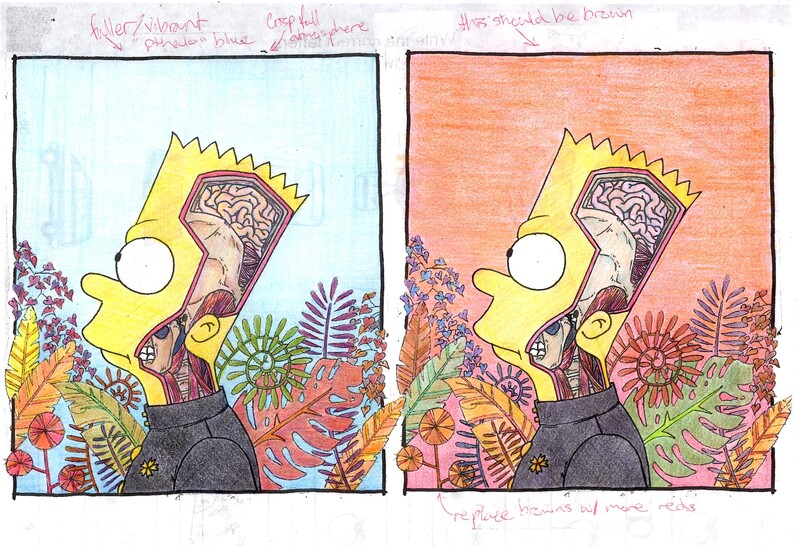 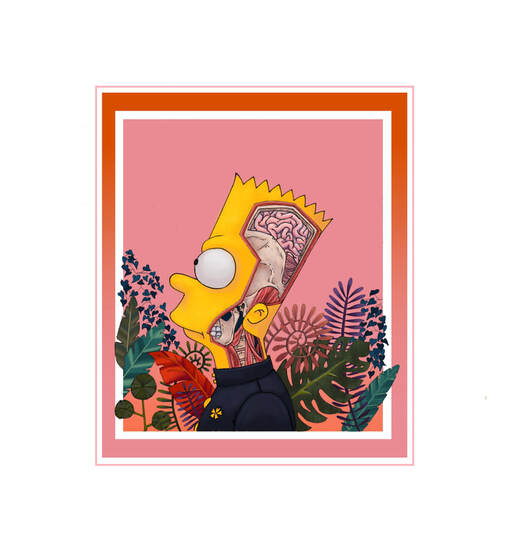 The very last step in the process is the final render. While I would normally use a program like Photoshop to bring my designs to finish, I've begun using Krita as an alternative. The program offers a huge selection of editable brushes with its painting suite that allow a certain amount of texture when applying colors of varying hues. I think this quality also helps reflects the "lo-fi" characteristics of the album.

I originally planned to have an ornate gold frame accompany the design as a nice juxtaposition in contrast, but ultimately felt its gaudiness took away from the whole. As a work around, I came up with a double reverse gradation that provided a sleek and contemporary feel that I felt was "trendy". Since the focal point of the piece is Bart(a known anti-establishment delinquent), I felt we needed multiple elements from the uniform, plants, posture and frame to upgrade the sophistication of his character.

This project was in no way particularly challenging but I did come to appreciate the fluidity and flexibility of my design process. This was in-turn very reassuring to Ghostpops since he subsequently ordered another commission upon completion.