When DinoJr. approached me with his ideas for an album cover and a demo of his track "Hello Strange", the influences of funk and impressions of psychedelic imagery were readily apparent. To narrow the scope of all that this could encompass, I compiled an inspiration bored that focused on the color, tone, and mood of his project. Unlike other projects, a heavier emphasis on pattern and gesture was taken into account since they were pre-determined to be a unique feature of this particular project. Among the images gathered below, I decided it was best to incorporate vibrant, neon imagery that could reinforce the ideas presented in DinoJr.​'s music production. These same ideas would go on to be very useful in his follow-up EP, "Magic Hour".

Since DInoJr. is one of the most high-profile artist I've ever had the pleasure of working with in Japan, I thought it was necessary to secure his confidence in my skillset my providing several options for his album cover. Each sketch prominently features his likeness in varying poses and unique backdrops, but the energy and diversity provided in sketch 4 would ultimately go on to be the design of choice. 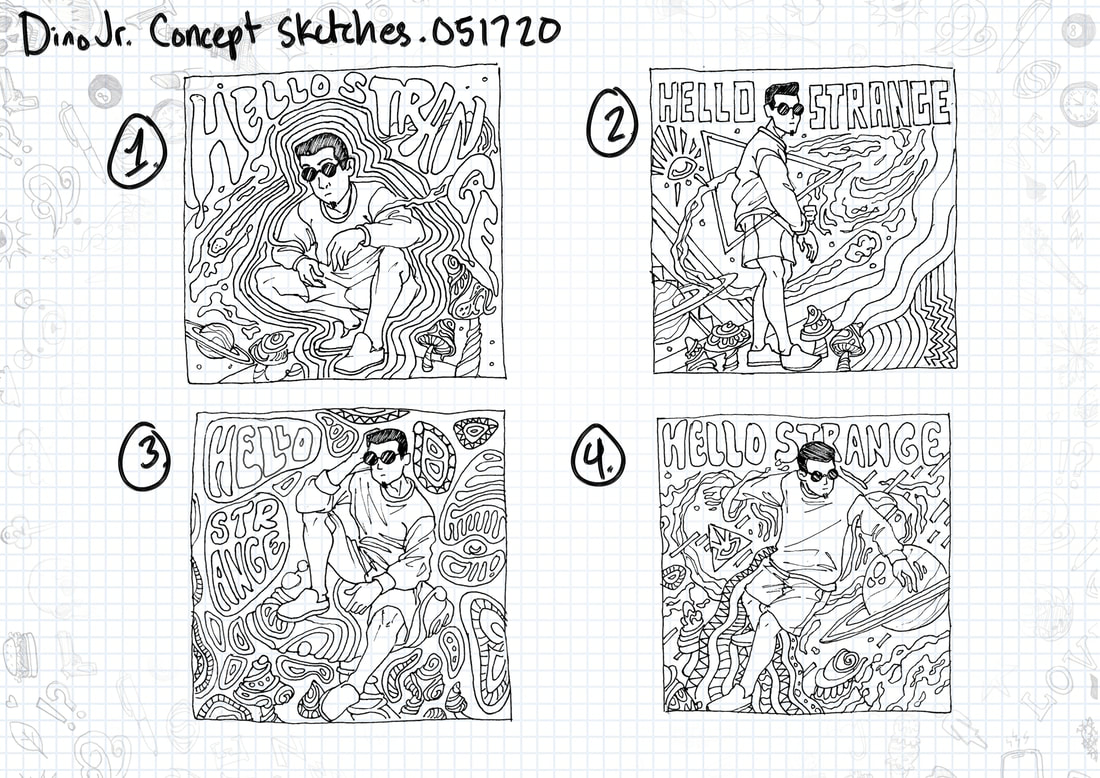 Moving forward with option 4, I doubled back to some of the inspirations compiled in our Pinterest board. Again, looking for key elements in the color selection that resonated with the upbeat tone of the record. However, its always in the best interest of my client to see the options that don't work to have a clearer understanding of the ideas that do work. So, upon the start of the color drafting process I proceeded to submit a decent amount of variety that could be seamlessly implemented into the final product. In order to do this effectively, I stuck to a very specific color pallet broadly shared among each example provided below. This allowed me to quickly edit and vary the proportion of each color while preserving the value system in each image. 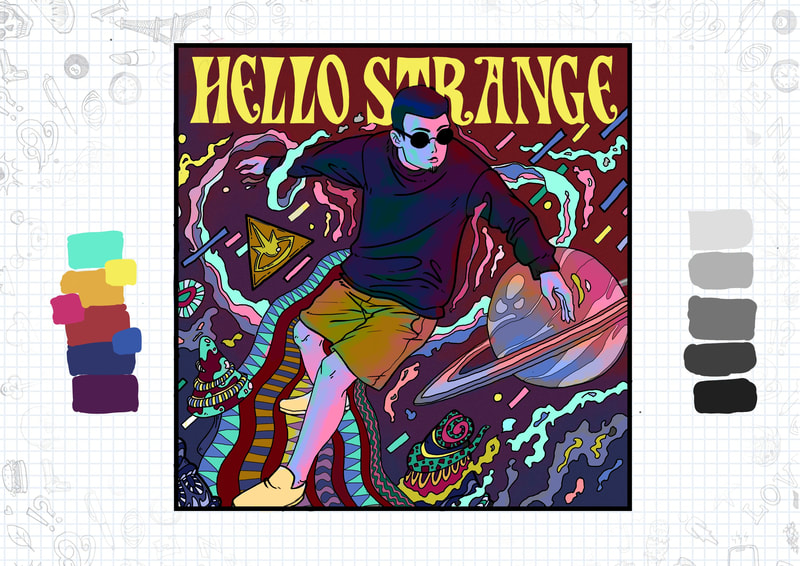 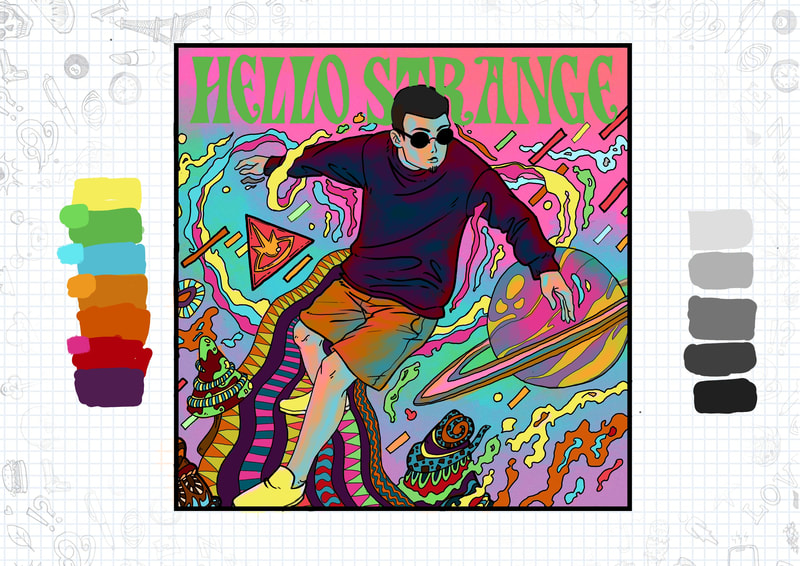 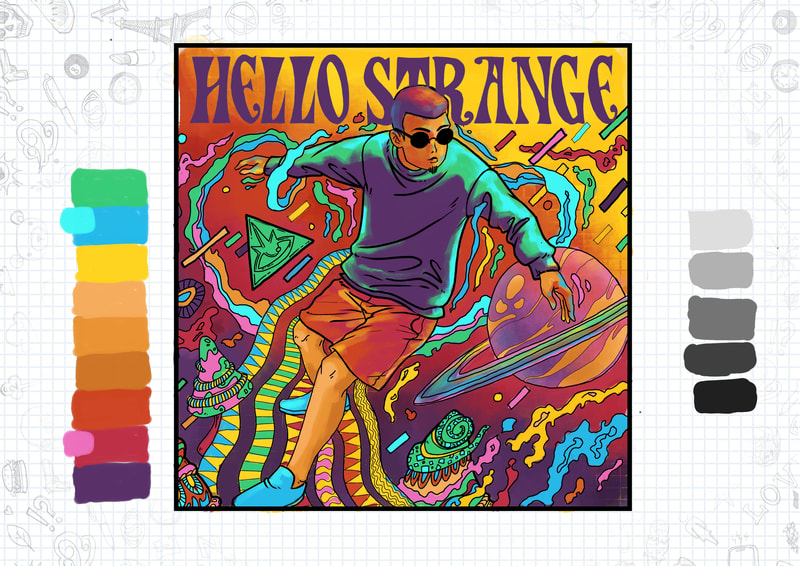 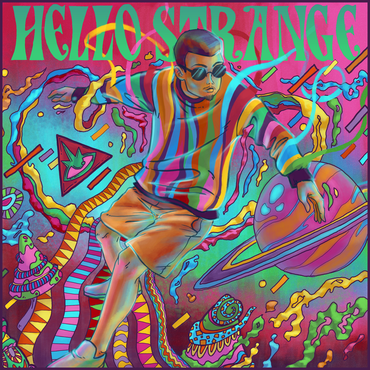 DInoJr. and I came to the conclusion that option 1 was far too dark to match the mood of the record, however we were split between 2 and 3. While both options were uniquely vibrant in their respective ways, 3 felt a bit too "southwestern". However, the bounce and edge lighting gave the necessary contrast we were looking for.

In the end, we agreed on image 2, proceeding to boost the luminosity and saturation of the color profile presented. I also chose to add a bit more visual complexity by referencing various sweater patterns. By implementing the lighting ideas derived from example 3 throughout the entirety of the piece, I was able to emphasize form and movement.

If you'd like to hear how DinoJr.'s music and my visual representation coalesced, take a look at the link below. To read more about the Hello Strange press release, click here.

Upon the completion of the first cover and subsequent release of the record, DinoJr. contacted me again for a second project entitled "Magic Hour". Since the song was in the same creative vein as the first, we used the same process and resources to create a second CD jacket. 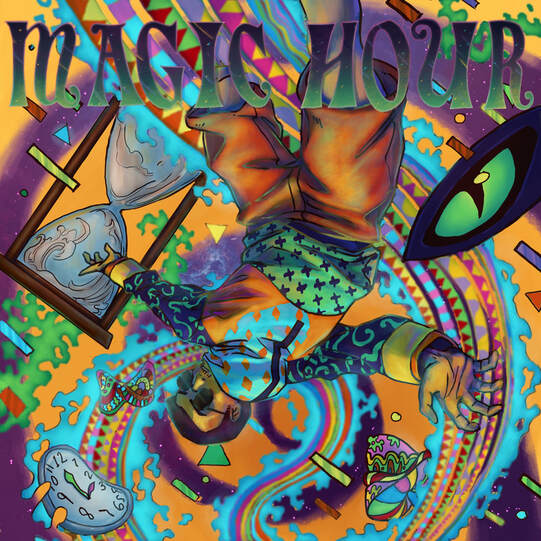 There were many good ideas among the original Hello Strange design that were definitely instrumental in delivering the final product for Magic Hour.

However, I felt certain areas of my execution could have been pushed a bit further to deliver a more refined product. I maintained similar font, but went through extra steps to help characterize the meaning of the words by refining its craftsmanship; cleaning the edges, adding glow, soft drop shadows, and space imagery as an overlay to tie the composition together. ​Next I looked into ways of incorporating box blur in certain areas to help focus the eye toward the center of the composition, and thus DinoJr.'s face. Early on in the design process, I wanted to create a composition featuring movement that conveyed the sense of "tumbling" through space. Lastly, I focused a bit of time in varying line weights and opacity to create different levels of depth.